I’ve been a huge fan of Meridian Brothers for many years so it was a great pleasure earlier this year to chat with Meridian mainman Eblis Álvarez about his latest album, ¿Dónde Estás María?, which is a continuation of the work he’s been doing, creating satirical, conceptual, very rhythmic work that equally draws from avant-garde ideas and Colombian mythology. In fact, on this latest effort he has stretched out even further to show an influence of pop, folk and guitar music from Peru and Brazil in his work. It’s a special record so give it a listen if you haven’t already. Here’s the link to the album on Soundway Records.

The result of our chat was a feature on Meridian Brothers in The Wire #403 and also an article that’s just been published online by Pura Mestiza, and that is available in English and Spanish.

I also asked Eblis to discuss some of the Brazilian records he has discovered on recent trips to Brazil (where he was touring with another band, Los Pirañas) and which you can check out on the Sounds and Colours website.

Check out the title track to the latest Meridian Brothers album below:

An article I wrote for The Wire’s regular Global Ear column, focusing on the underground music scene in Lima, has been published in this month’s issue (#379). The piece looked at the reissuing of albums from Peru’s avant-garde in the 70s (namely Miguel Flores, César Bolaños, Arturo Ruiz del Pozo and Édgar Válcarcel) as well as new artists including Pauchi Sasaki and Liquidarlo Celuloide.

The issue is available here. 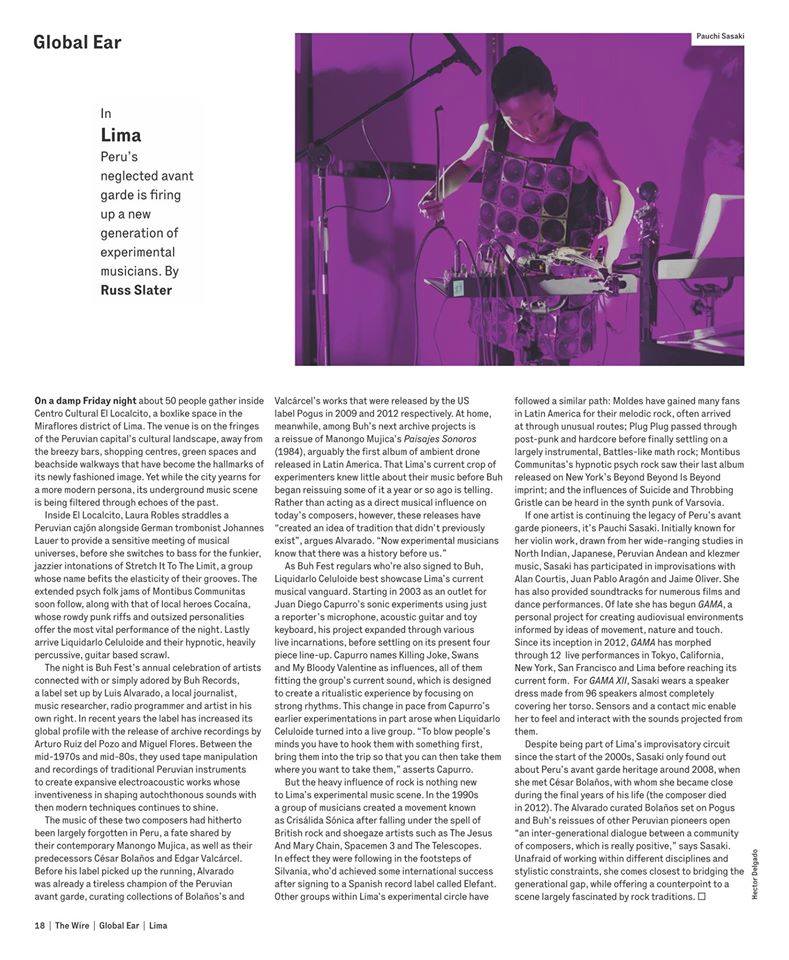 Article on Sao Paulo’s music scene for the May 2011 edition of The Wire. END_OF_DOCUMENT_TOKEN_TO_BE_REPLACED

I wrote an article on the underground scene in Sao Paulo for the May edition of The Wire, an English magazine subtitled Adventures In Modern Music. To accompany the article they asked me to get a few tracks together for their website.  I managed to get songs together from Metá-Metá, Bodes e Elefantes, Lucas Santtana, Lulina, Criolo and Rodrigo Brandao for this. You can listen to these songs at The Wire’s website here: