Their is simply something very special about Paddy McAloon and the work he makes as Prefab Sprout. I think it’s the passion for songwriting that shines through everything he writes. In the autumn of 2010 I got the chance to interview Paddy, though I would have to do this by email, which would then be printed off and passed onto him. He responded by typing up his answers and then faxing it through to PopMatters who then scanned it in and emailed it to me. For some reason this process makes me feel very strongly about this interview. END_OF_DOCUMENT_TOKEN_TO_BE_REPLACED

My interview with Cibelle, conducted during a very hot summer’s morning in 2010 after I had drank way too much the night before. I believe I arrived about 20 minutes late, which is never a great sign! Here’s how the article started:

I took an instant liking to Cibelle. She seemed so unpretentious about her music and excited by happy accidents, which made me feel less bad for being late for the interview. I figured her free-spiritedness could be due to the fact that her career had never followed any set path, yet had continued to prosper, or at least this was how it seemed to me. After appearing on Suba’s Sao Paulo Confessions album, a modern mix of electronica and bossa nova, she recorded her self-titled debut album in a similar vein. The album was well-received but it was her second The Shine of Dried Electric Leaves that sealed her status in Europe, no doubt helped by her covers of Caetano Veloso and Tom Waits songs and collaboration with Devendra Banhart. It was a mix of acoustic guitars, studio experimentation and a fresh sound that passed through songs both in English and Portuguese.

My interview with Jeremy Barnes of A Hawk and A Hacksaw has just been published by Drowned In Sound. Here’s how it starts:

Ever since I first saw Jeremy Barnes perform as A Hawk and A Hacksaw in Nottingham’s Bunker’s Hill Inn I have kept a close eye on this group of his. At that point it was just a solo project, involving one man with a drum kit and accordion, playing cymbals with the drumsticks that were attached to his head. It was clear that his music was moving in a different direction to his earlier work with Bablicon and Neutral Milk Hotel.

In 2004 he met Heather Trost and A Hawk and a Hacksaw become a two-piece, decamping to Budapest, Hungary, which seemed to complete the direction in sound Barnes had been taking; the influence of Eastern European music was now unredoubtable. It’s something they’ve explored considerably since, right up to Cervantine, released earlier this year. 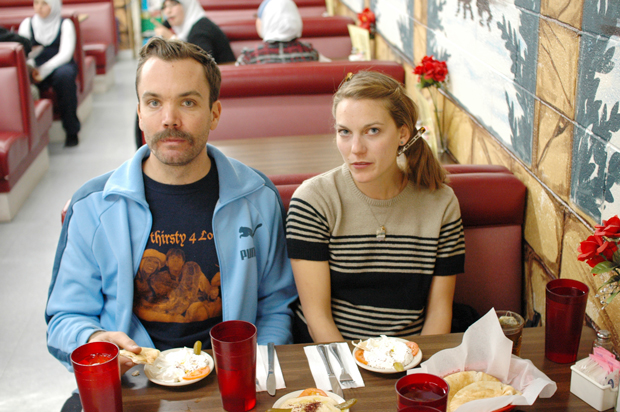 This article was written for JungleDrums Online and was published on 4th April 2011. The interview took place in London the week before. The photos featured in the article (and which I’ve also included here) are by Caroline Bittencourt. END_OF_DOCUMENT_TOKEN_TO_BE_REPLACED